Barlick for diesel, and Meg gets Pickled

We were down to below a quarter tank of the red stuff, not having filled since Ripon Marina 7 seven weeks ago, so today it was a trip up onto the summit level to Lower Park Marina at Barnoldswick ( “Barlick” to the locals) to fill up. Another grey day that actually got greyer, finally letting go with a heavy shower soon after we’d got moored up for the night. Not good for those who’re having bonfires tonight…

At East Marton the A59 is carried over the canal on a curious double-arched bridge. 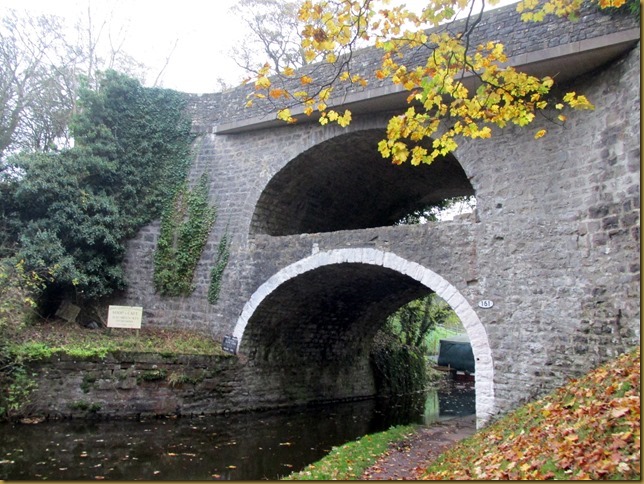 I’m not sure if the top arch was added when the road was improved sometime in the past, or if it was built this way. If it is an addition the stonework has been well matched. 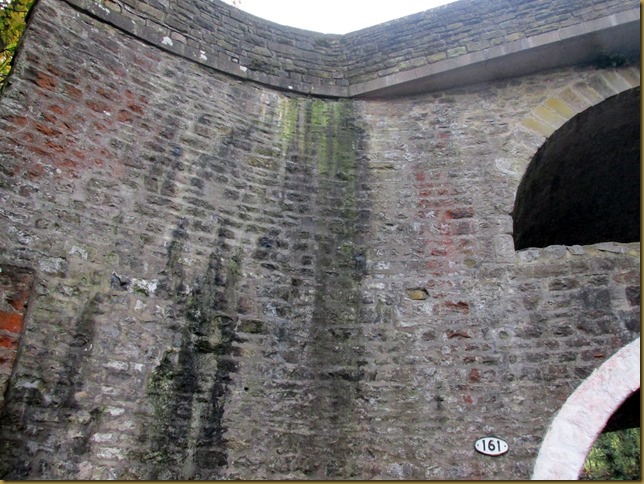 We had odd drizzly periods as we headed along the 2½ mile stretch to the bottom of Greenberfield Locks. It’s a shame the weather wasn’t brighter; it’s a very pleasant bit of canal. 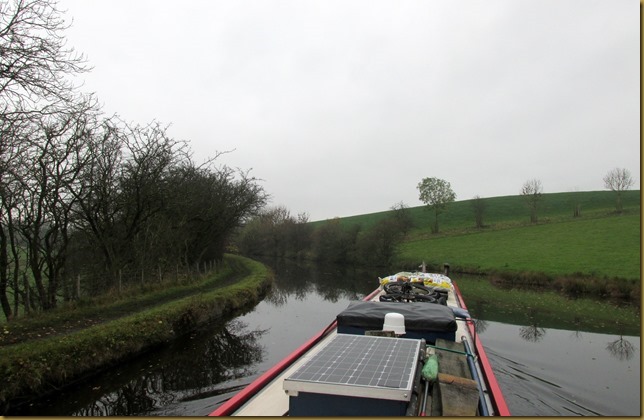 The Pennine Way joins/leaves (depending on whether you’re going north or south…) the towpath just a little to the south. 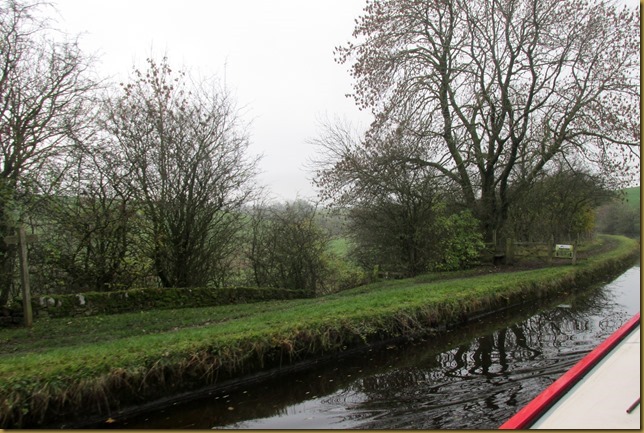 Last time we were up here there were signs warning of Blue/Green Algae. The signs are still there, the situation hasn’t improved. 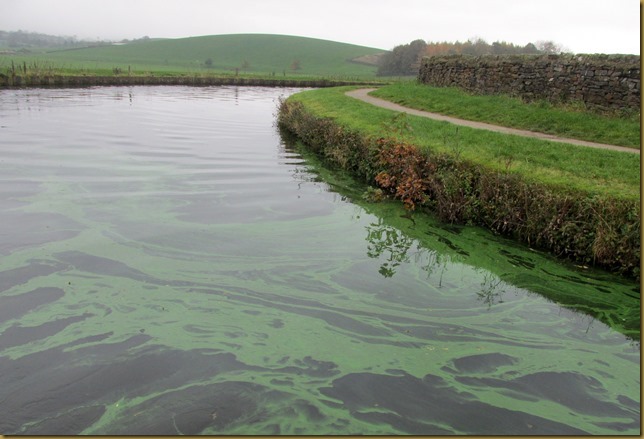 You wouldn’t want to fall in there!

We had a fairly quick trip up the three Greenberfield Locks, the bottom one was empty, the middle full and the top one about half-way! There was a boat waiting to come down, an instructor taking two guys on a Helmsman Course, so they emptied the top lock for us and brought us up. 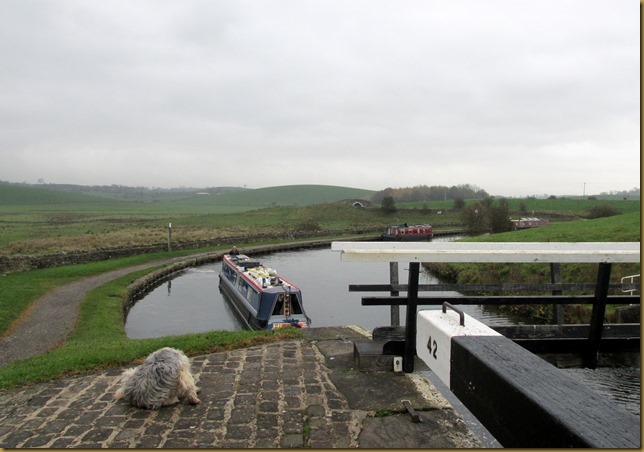 At the top we filled and emptied the domestic receptacles before pushing on into the town. 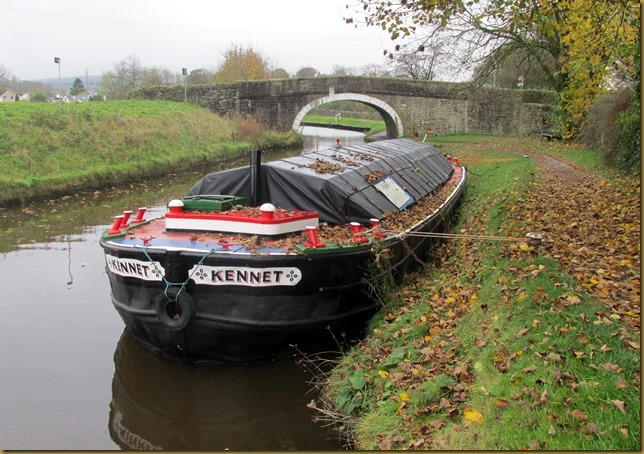 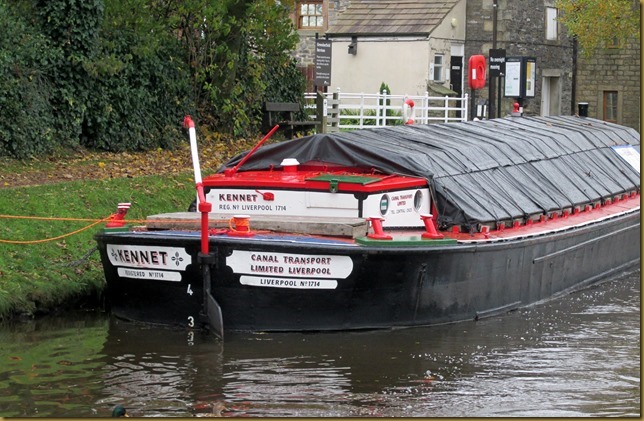 Moored just along from the services is Kennet, a Leeds and Liverpool Short Boat. These were the cargo carriers up here, designed on the hull sizes of Mersey Flats and Humber Keels, hence the short locks. Kennet was built in 1947 and worked on the canal for Canal Transport Limited until retirement in 1960.
It became part of British Waterways’ maintenance fleet for a while, before being adopted by the Leeds and Liverpool Canal Society to “help maintain, restore and publicise” the canal. More info here.


We’re now on the summit level of the canal, around 490 feet above sea level. Since Leeds we’ve climbed up just over 400 feet through 45 locks over a distance of around 40 miles. And it’s taken us 5 weeks!

An uneventful trip through the fringes of Barlick, past the Rolls Royce and Silent Night factories, brought us to Lower Park Marina, where 160 litres of red diesel and a couple of items from the chandlery made my debit card wince (although, to be fair, the fuel was a very reasonable 70 pence), then I made a quick trip up to the nearest shop to get something easy for dinner tonight. The guy at the marina told me to leave the boat on his wharf, as it wasn’t busy.

We’d met several of the local dogs when we pulled in, it’s very relaxed here. One of them was Pickle, who took advantage of the open front doors and raided Meg’s biscuit bowl while we were filling with fuel. I closed the internal door at the back when I went shopping, but he managed to push it open and made another visit to Meg’s pantry, this time eating her lunch that Mags had just put out!

He was a bit disappointed to see us go… 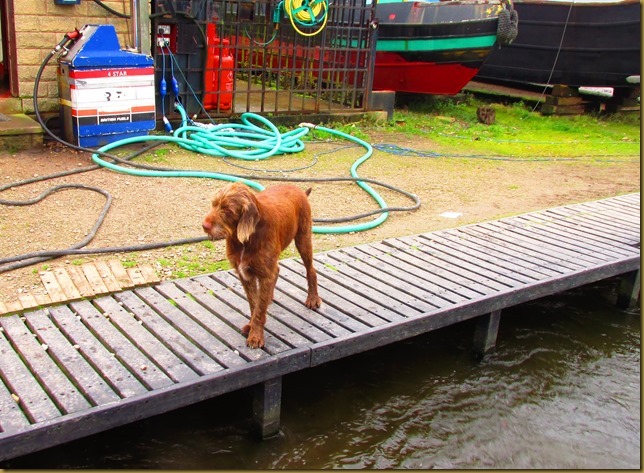 From here we went another ¾ of a mile past the Anchor Inn at Salterforth, turned around and headed back, mooring just past the marina again. 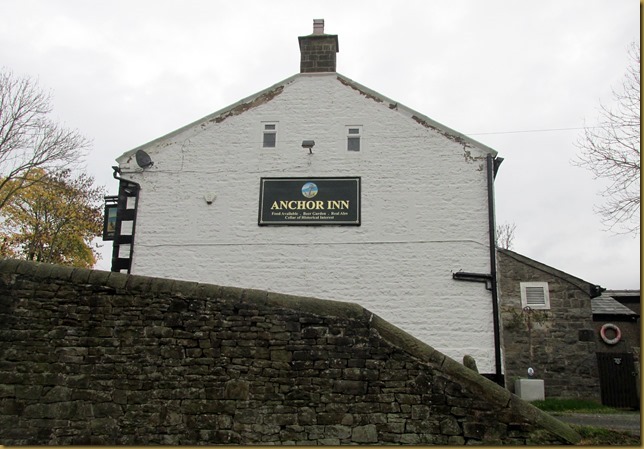 There’s moorings here; I think we’ll be using them at the weekend.