So far, so good

Six hours “in the saddle” is a long day by our standards, but well worth it. We left the moorings near Aspley basin in Huddersfield at 08:35 after a very wet night. The showers had cleared, but the towpath was decidedly puddly. 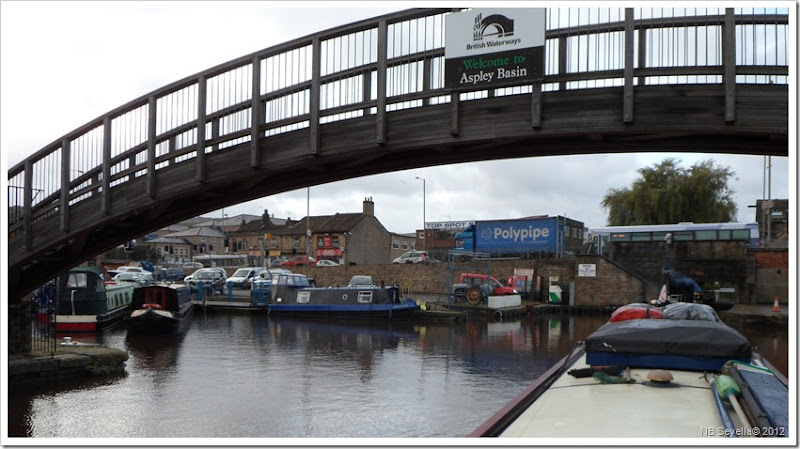 Our introduction to the Huddersfield Narrow Canal came with a low tunnel under Wakefield Road. This is one of the new tunnels, replacing a narrow culvert whjen the navigation was restored. 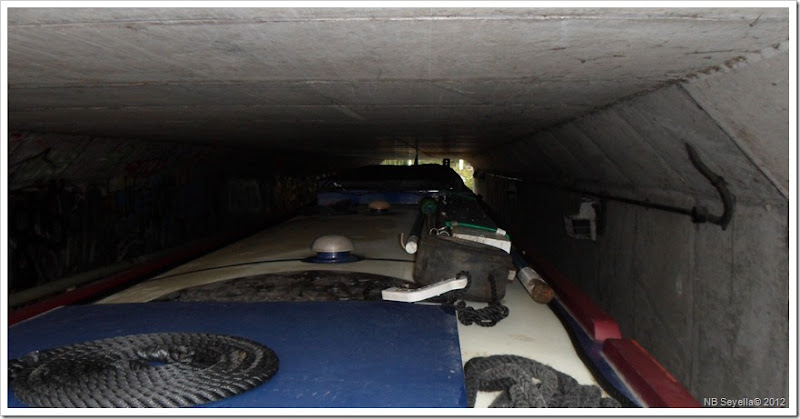 Just two inches to spare above the chimney.

Back out into daylight the canal twists through the university buildings before another modification to the 1811 canal is encountered. 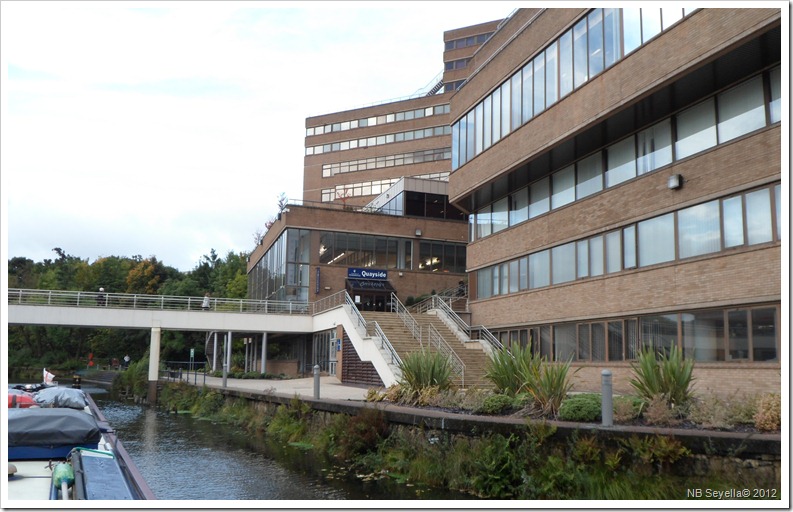 Just around the corner is our first HNC Lock, No 1E. 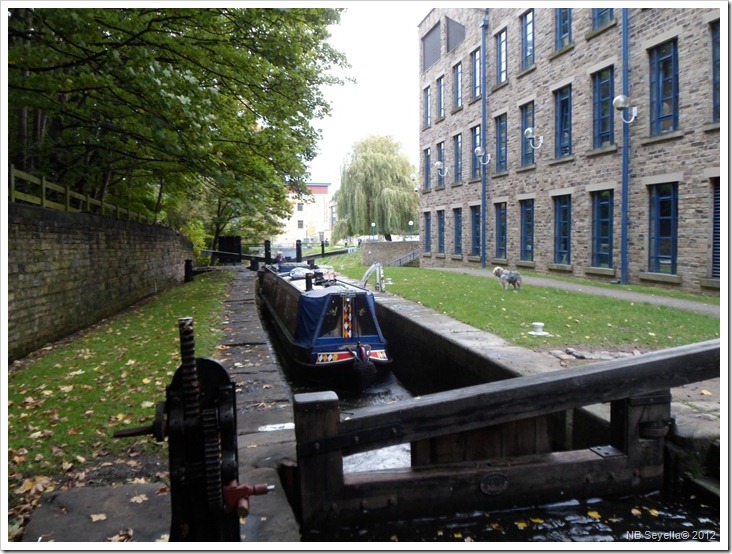 Although overshadowed by buildings and trees, it was a joy to see. A midlands-sized canal lock! I much prefer these, there’s less walking around, they fill quicker and the boat doesn’t drift about in the chamber. And the gates are lighter!

After the canal was abandoned two factories were extended over the canal, closing the navigation. The solution for both was to lower the water level and excavate beneath the buildings, forming two short tunnels. The original canal level was regained by constructing new locks above the tunnels. Bates Tunnel is the first….

The old lock, removed to lower the level beneath Bate’s factory 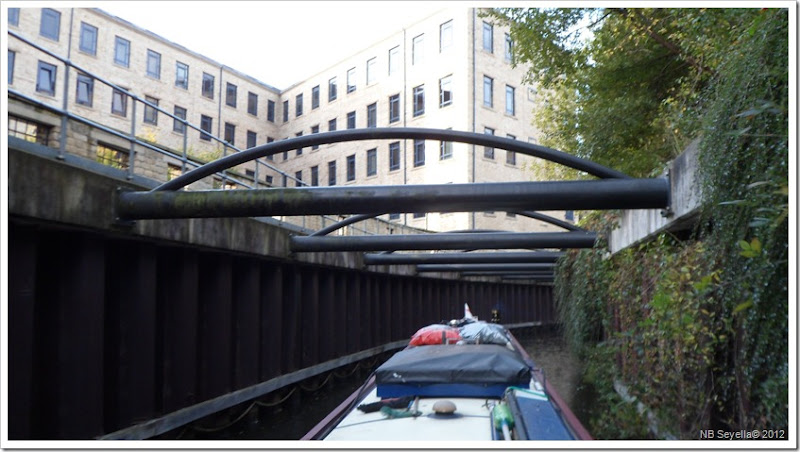 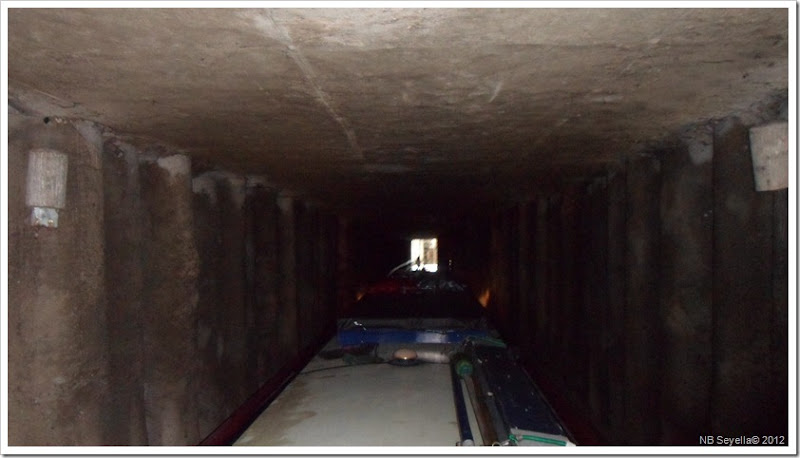 Lock 2E follows immediately, deep and in soulless concrete, then there’s a short pound with a very narrow original brick bridge almost buried beneath a new concrete one. 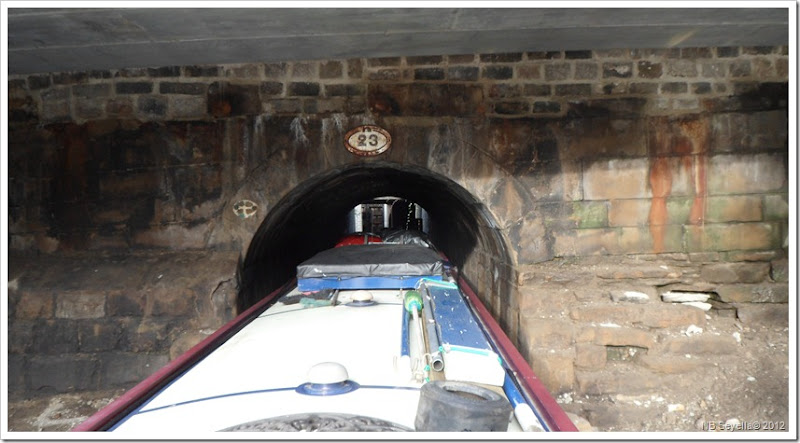 In the distance can be seen the new, new Lock 3E.

Just beyond Bridge 23 was the original Lock 3E. Like at Bates, this was removed and resited at the far end of a tunnel under Sellers factory. Recently the factory was demolished and the area is being redeveloped.
With the site cleared the tunnel was no longer necessary, in fact with the roof removed it would have left a deep and dangerous cutting through the new site. So the lock was moved for the second time, to bring the canal up to the original level through the site. 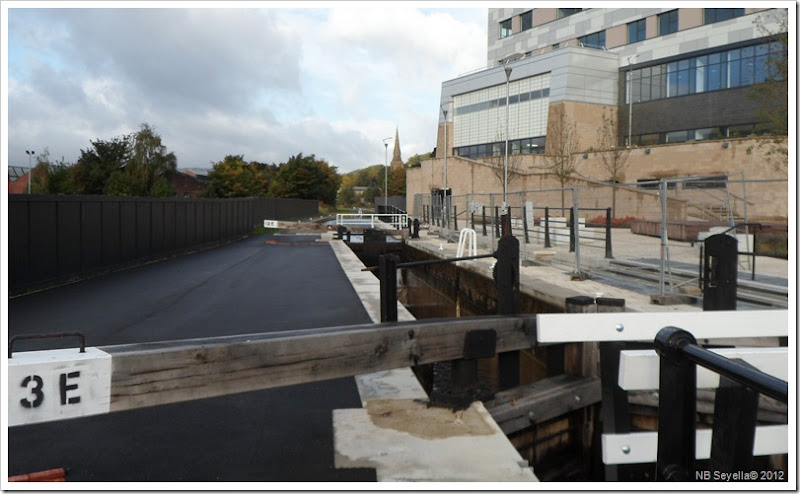 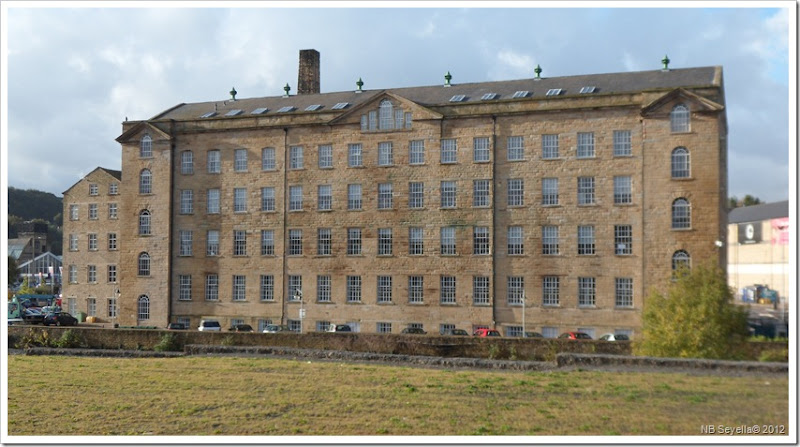 You’ll have noticed the suffix ”E” following the lock numbers. These identify those locks on the east side of the summit. On the west side, dropping down to Stalybridge, they’ll have a “W”.
I don’t know whether this is the original numbering scheme, if so it’s the first time we’ve come across it.

We started to move out of the built up area at Lock 4E, where we got a free bubble bath. 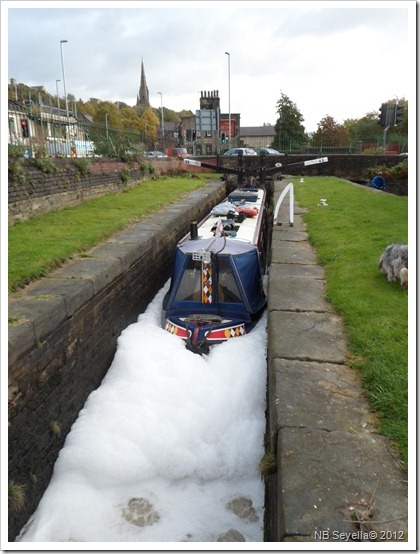 Sometimes this foaming has a natural, organic cause, at others it’s chemical contamination from industry. I hope it’s the former, but if the paint peels off it’s probably the latter! 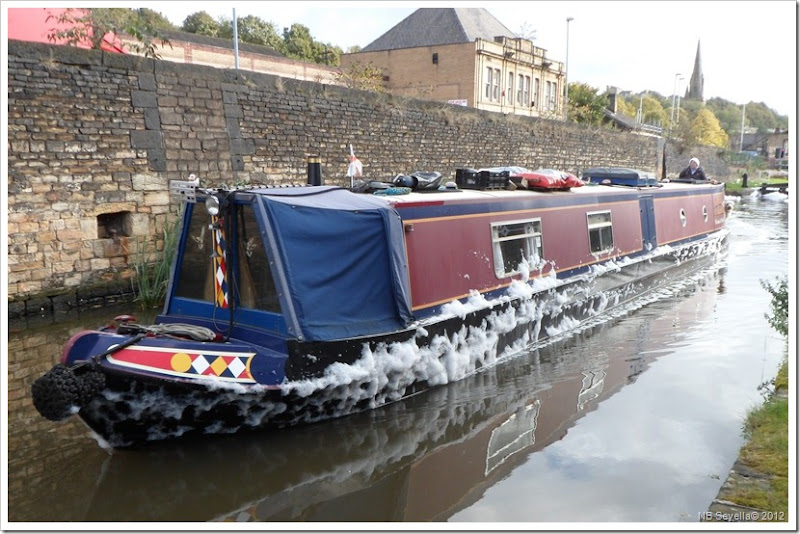 The canal closely follows the River Colne, consequently it shares the valley as it climbs up to the watershed. It becomes hemmed in above Lock 5E, with any open areas occupied by the ubiquitous mills and associated houses. Lock 5E, crossed by the railway 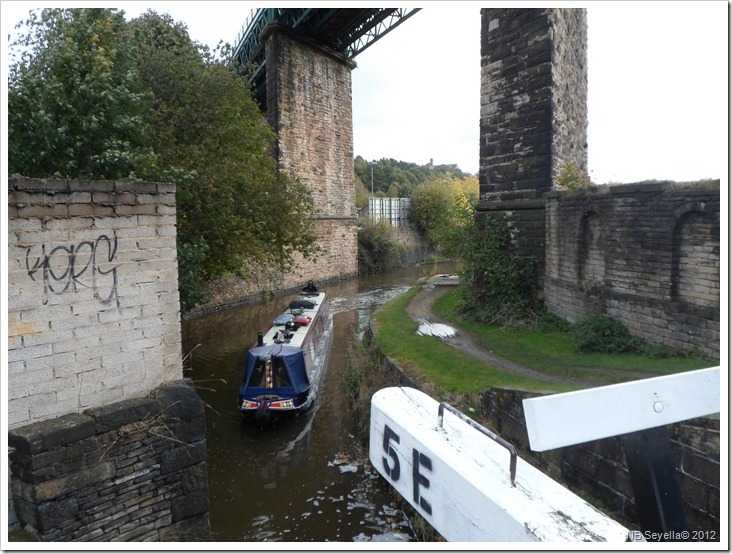 The road has been widened adjacent to 8E, you have to stand on the pavement to push the balance beams. 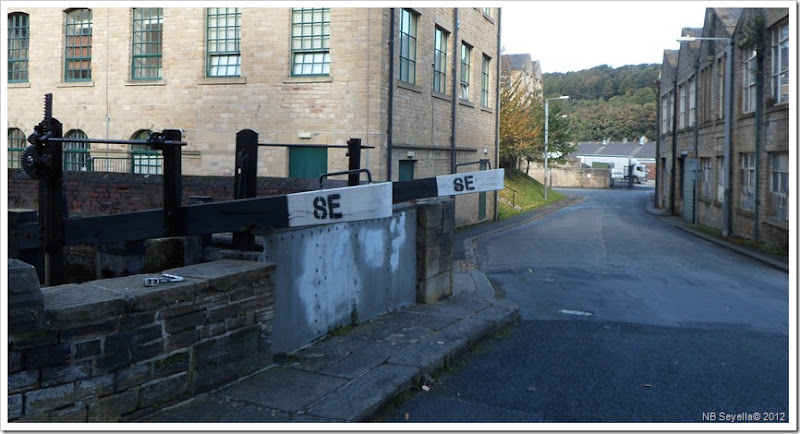 All the while watching out for HGVs….

I think this is Cliff End 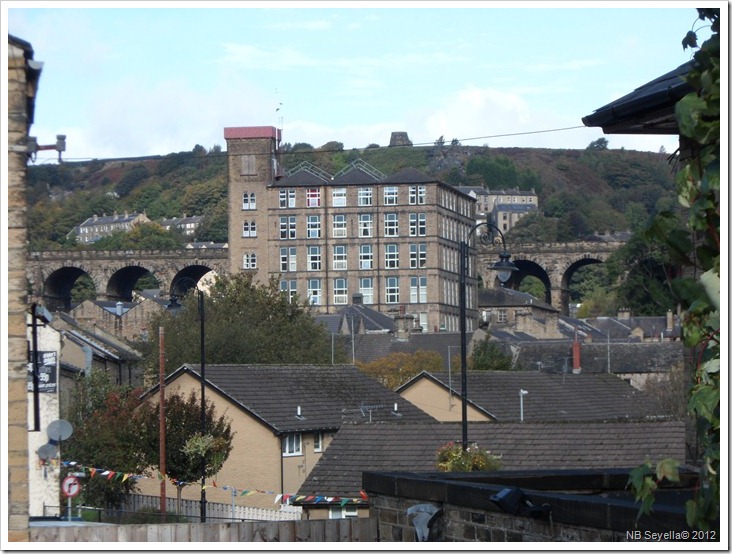 We worked our way steadily uphill, retrieving a wheelie bin from above 10E, then meeting a boat at 12E. Yes, a boat. The only one today… 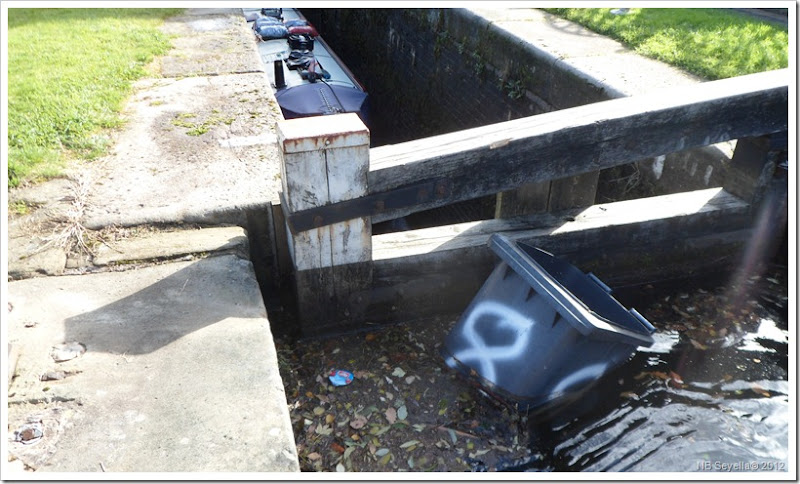 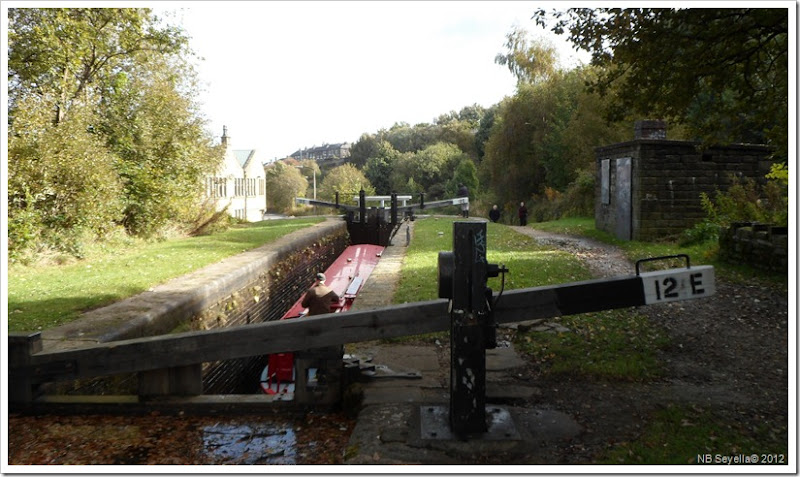 We stopped for lunch here for an hour, then suitably fortified by tomato soup and crusty bread set off on the second half of the day. After a bright morning we started to have a few drops of rain, only intermittent but the temperature dropped without the sunshine so the wind felt a lot colder.

Above 14E near Golcar 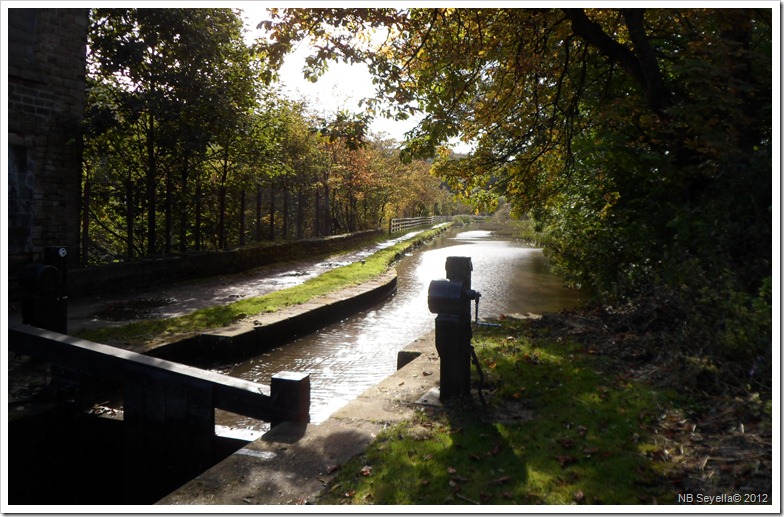 Golcar Aqueduct over the river 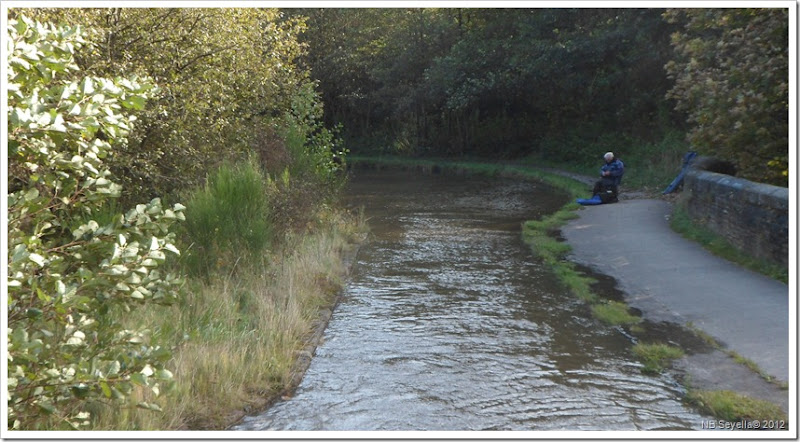 Dour stone houses crowd the southern ridge above the river 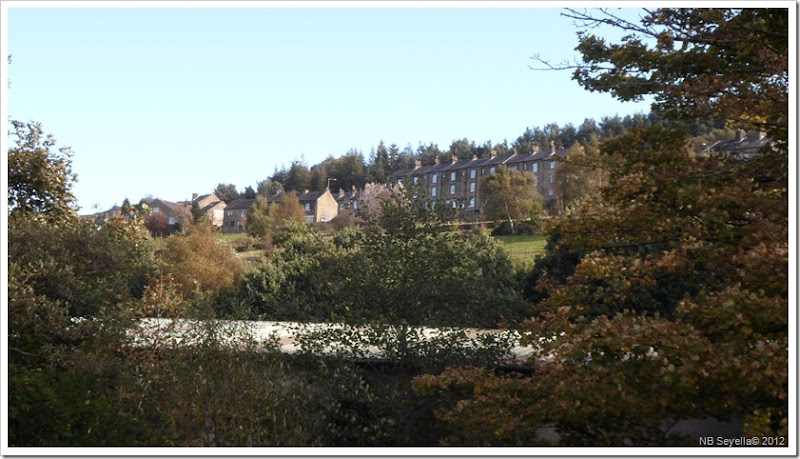 Four storeys at the front, maybe only two at the back.

The boat got a rinse off at Lock 18E, “pissers” emptying voids behind the lock walls. Be sure to keep your windows and side hatches closed, eh Sue!

We’ve had the foam wash, now we get the rinse! 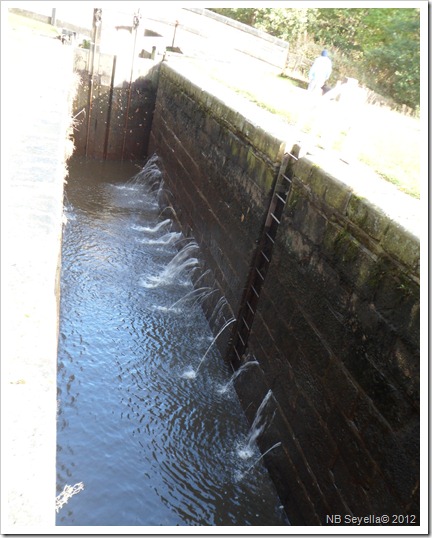 She’s still smiling, or is it a grimace? 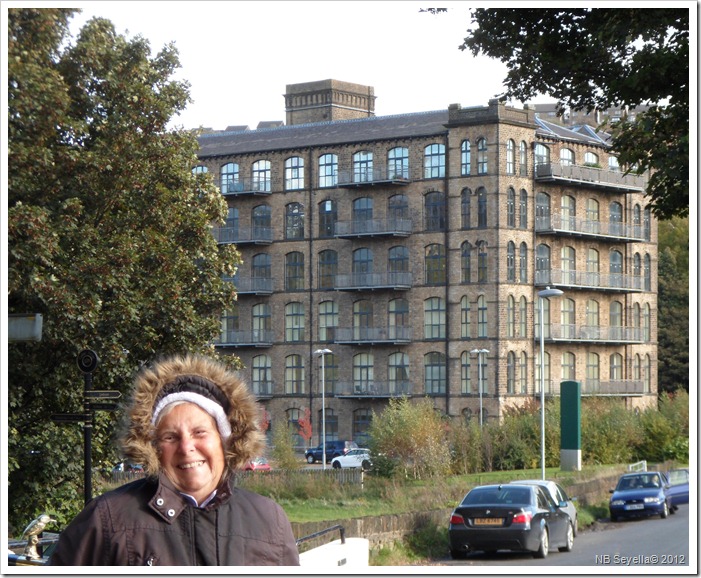 Although some of the pounds were shallow, there was plenty of water coming down the bywashes. Too much in some cases, making it difficult to get into the locks. 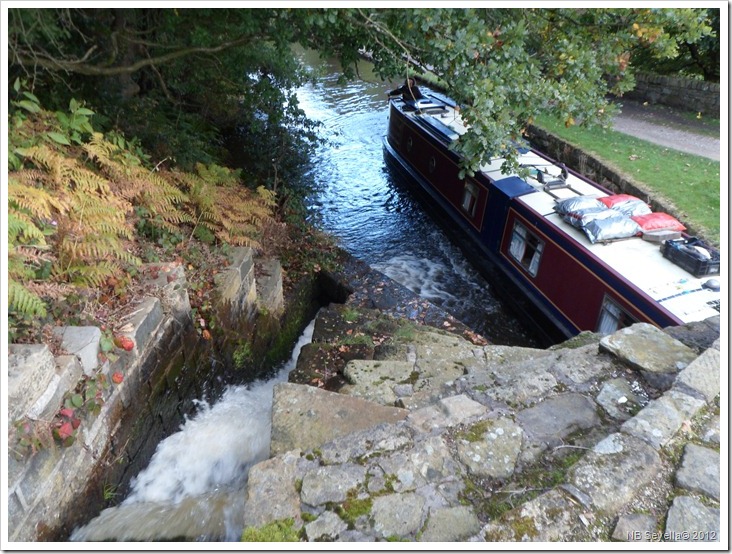 A lot of the gates have been replaced in the last five years, but those on Lock 19E are getting past their sell-by date. There are some gate renewals scheduled during the winter stoppages for this canal, but whether they’ll happen or not remains to be seen.

There’s another rebuilt section at Lock 20E, the chamber has been moved a hundred yards uphill, leaving a narrow concrete channel below. 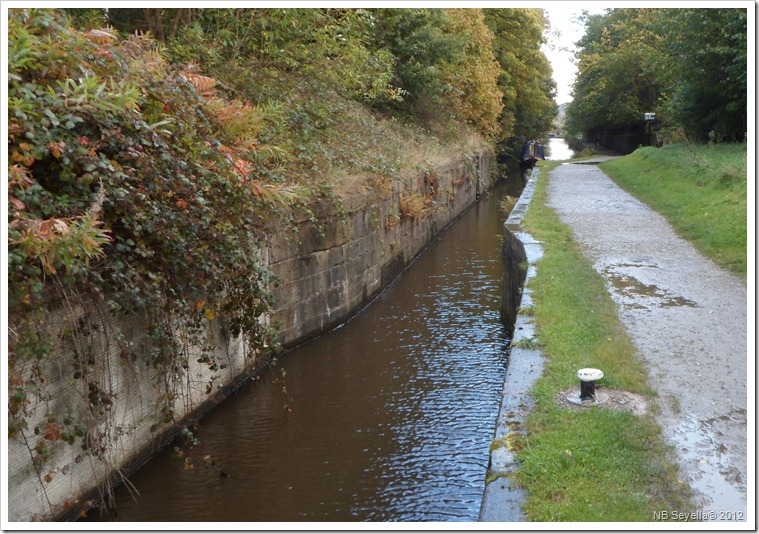 Nicholson’s canal guide indicates moorings above Lock 20E, but the towpath was muddy and the bank overgrown, so we went up L21E as well and moored on the offside just above. These are visitor moorings with rings and an all-weather surface to the path. Much better.

It’s been a good day. Maybe we’ve just done the easy bit, but our experience today belies the stories of shallow pounds, heavy gates and stiff or inoperative paddle gear. Yes, there was the odd leaky lock and difficult paddle,  and yes, some sections could do with dredging, but we can all think of rather more heavily trafficked canals with the same problems, can’t we?

If it’s all like this, well, good. If it gets worse, well, that’s only what we’ve been led to expect. We’re over halfway to the summit now, and we’ve two more days to get there. No problem, eh. We’ll see….

Yes, Geoff, we've been very careful to close side hatch and windows since we received an uninvited water cascade at a lock above Slaithwaite! Watch out for it! Glad you're enjoying it - the scenery is glorious (have your camera ready for the drop down from Diggle to Uppermill...)

Going to watch your trip with interest, good luck.