No way back for a while, a bit of marina-ing and a trip up to God’s Country.

We left Nantwich last Saturday, heading north back to Hurleston Junction and up the locks onto the Llangollen Canal.

Back across Nantwich Aqueduct. 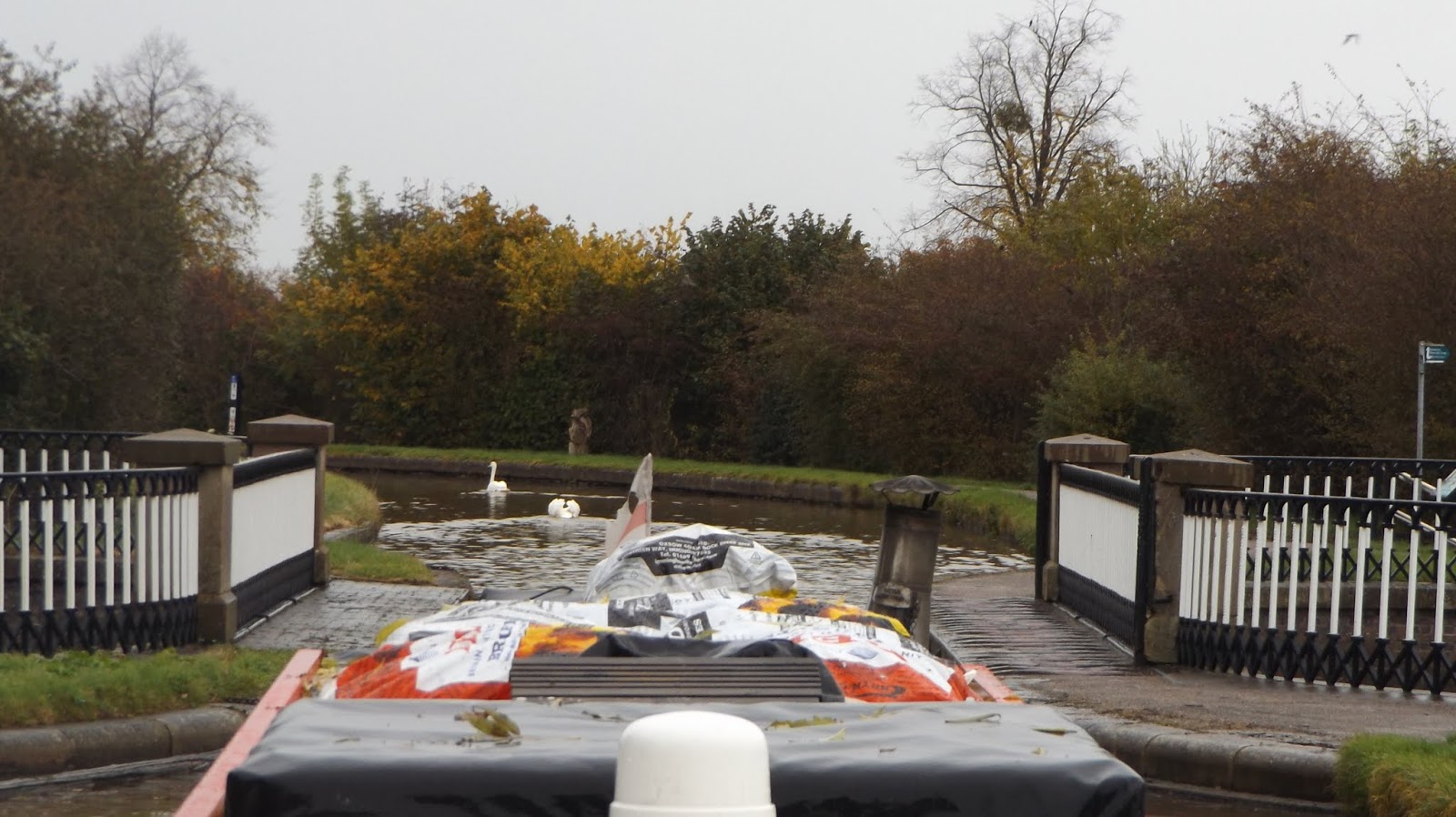 We dropped off recycling at the service wharf, then toddled on, out of town.

This boat’s been here a long, long time. 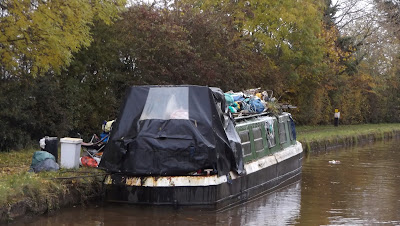 The roof is so full of clutter now it’s overflowing onto the towpath!

There were no boats about until we got to the junction, then sod’s law dictated that we arrived just behind another boat! 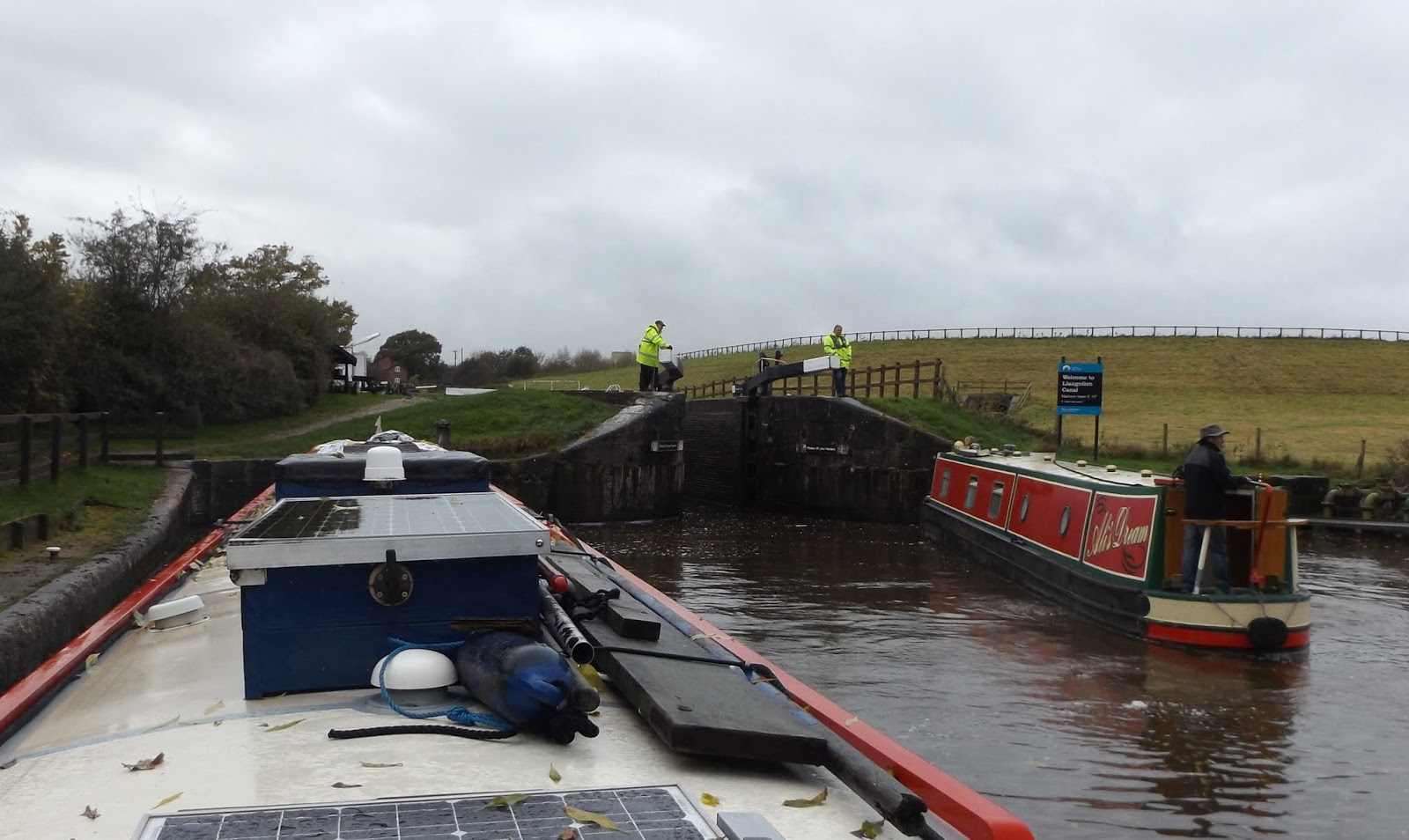 It’s the bottom lock that is dodgy, the sides have been slowly moving inwards making the chamber progressively narrower. Even 6’10” wide boats are snug now! 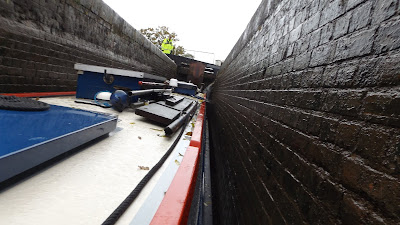 By now CRT should have started to dismantle the chamber to reinforce the area. Then the lock will be rebuilt to the correct width, hopefully the work will be completed by the end of March. Till then we’ll be cruising up and down the Llangollen. 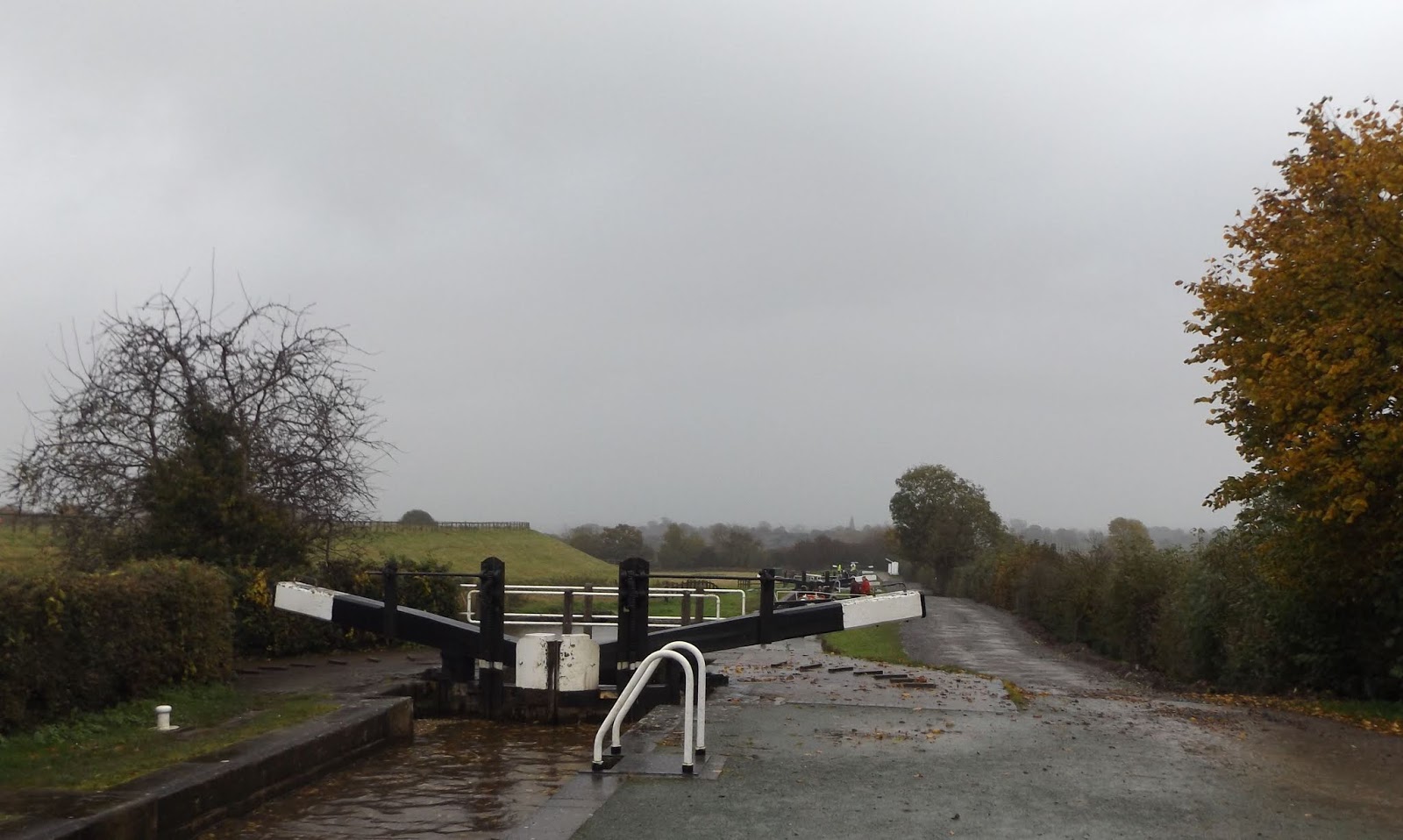 It was a bit damp as we left the top of the locks, but it did give us a hazy rainbow. 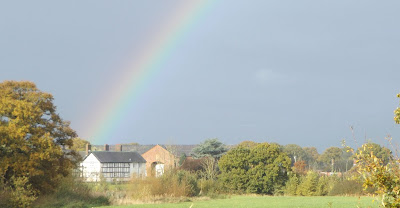 We moored before Bridge 5, Platt’s, and stayed there till late Monday morning, when we moved just a half mile to Swanley Bridge Marina. 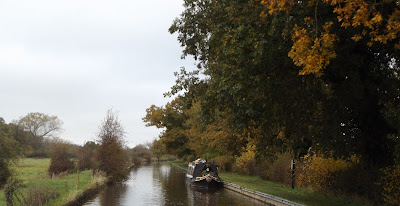 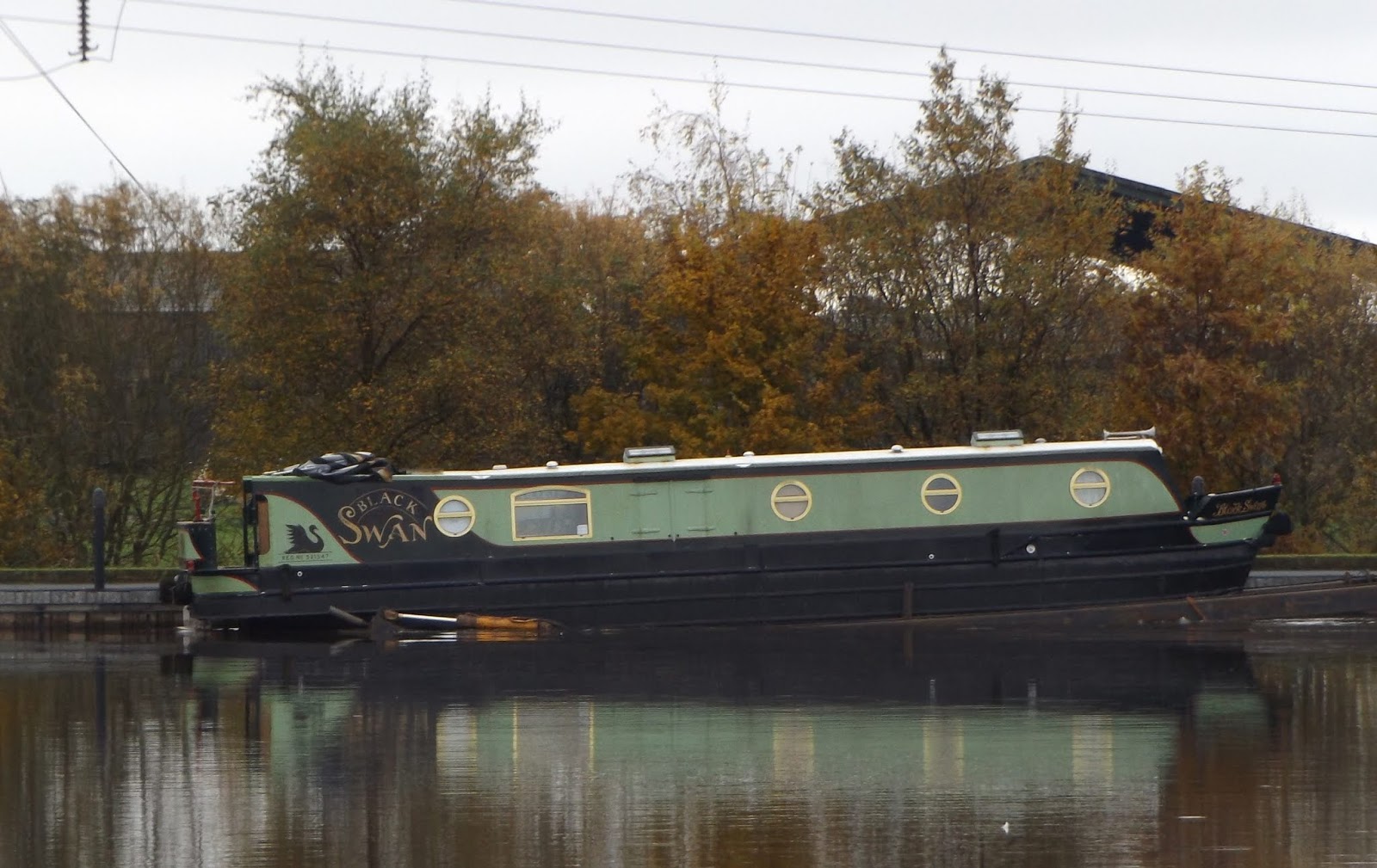 We were allocated a good berth on the Boathouse Moorings, pretty well straight off the bow and onto grass for Meg, and onto a good path for Mags. I collected a car from Enterprise in Crewe, did a big shop at Morrison’s then got lost on the way back after getting tangled up in roadworks.

We had a long day on Tuesday, leaving at around nine and not getting back until half-seven. We drove up to Yorkshire, first for Mags’ annual review at Bentham then for Meg’s regular kidney function check at Skipton.

The distinctive silhouette of Ingleborough. 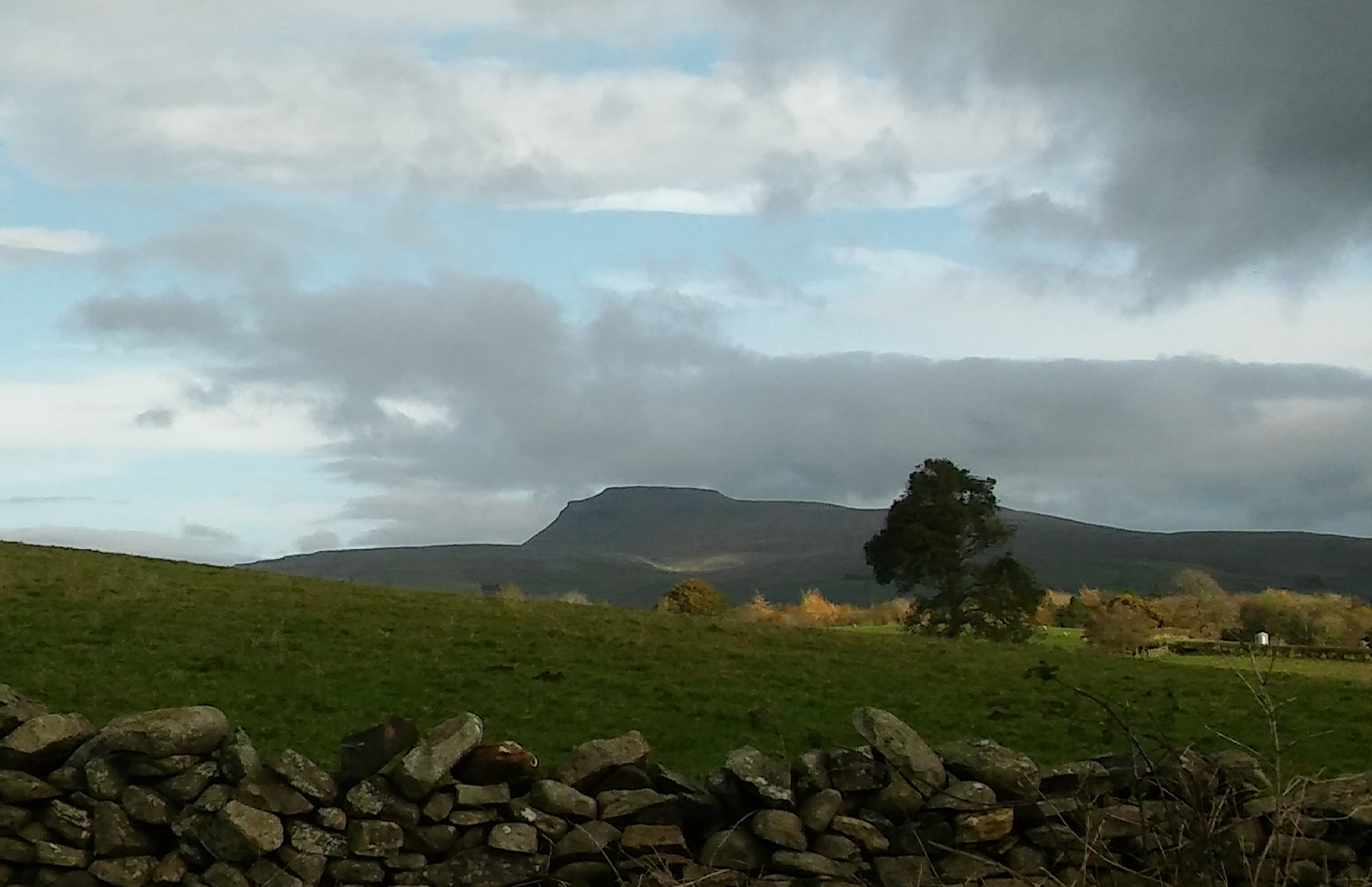 We had lunch with Mags’ son Howard in between appointments, catching up with news and collecting the mail.

I was a bit boggly-eyed by the time we got home, and was glad of a bit of a lie-in yesterday. We’d booked the berth for three nights, just as well with it being wet yesterday.

Today we pulled out of our berth, paused on the service wharf for a splash of diesel and some solid fuel, then motored out (in the rain again) to moor just around the corner from Swanley Bottom Lock.

The weather is better tomorrow so we’ll head up to Wrenbury then. 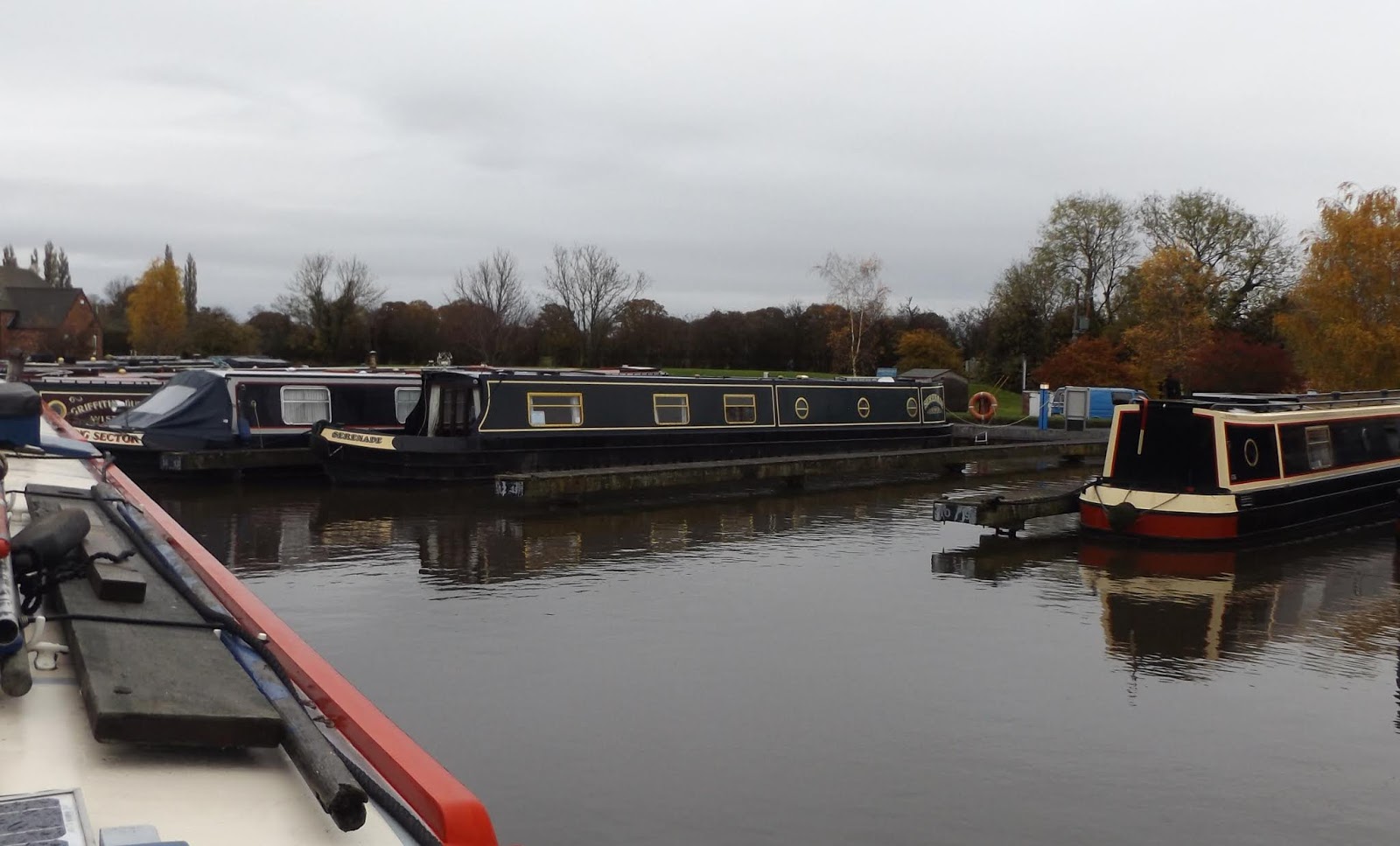 One of the items I picked up was a new thermostat for the fridge. It conked out a few weeks ago, at least leaving the compressor running. I took the old one out and fitted a switch instead so I could knock it on and off when required, but it’s now running on the new stat.

Then this morning the Webasto failed to start. It’s been very reliable since I rebuilt it 6 months ago, but this morning it sounded like the air fan had failed. Anyway, I took it out, stripped it down and replaced the air motor assembly with a spare, only to find a poor connection on the live feed. I didn’t need to take the thing apart after all! There’s a lesson to be learned there…
Anyhow, it’s working again now.

Geoff you are the cleverest man I know. Its a low start of course, but you are still at the top stripping things down and all.

Hope Margaret was a good girl at the Quacks and that this winter proves mild for the pair of you,

Big kisses to you both,