We left the countryside mooring near Bridge 25 on Thursday, there was a gap in the poor weather and supplies of fresh food were running low and we didn’t want to risk scurvy…

Still dull, but at least it stayed dry. 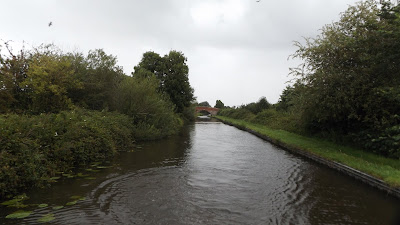 We pulled in Bridge 29a so I could make a quick trip up to the small but close Co-op, then pushed on into Burton.

Up the shallow Dallow Lock. 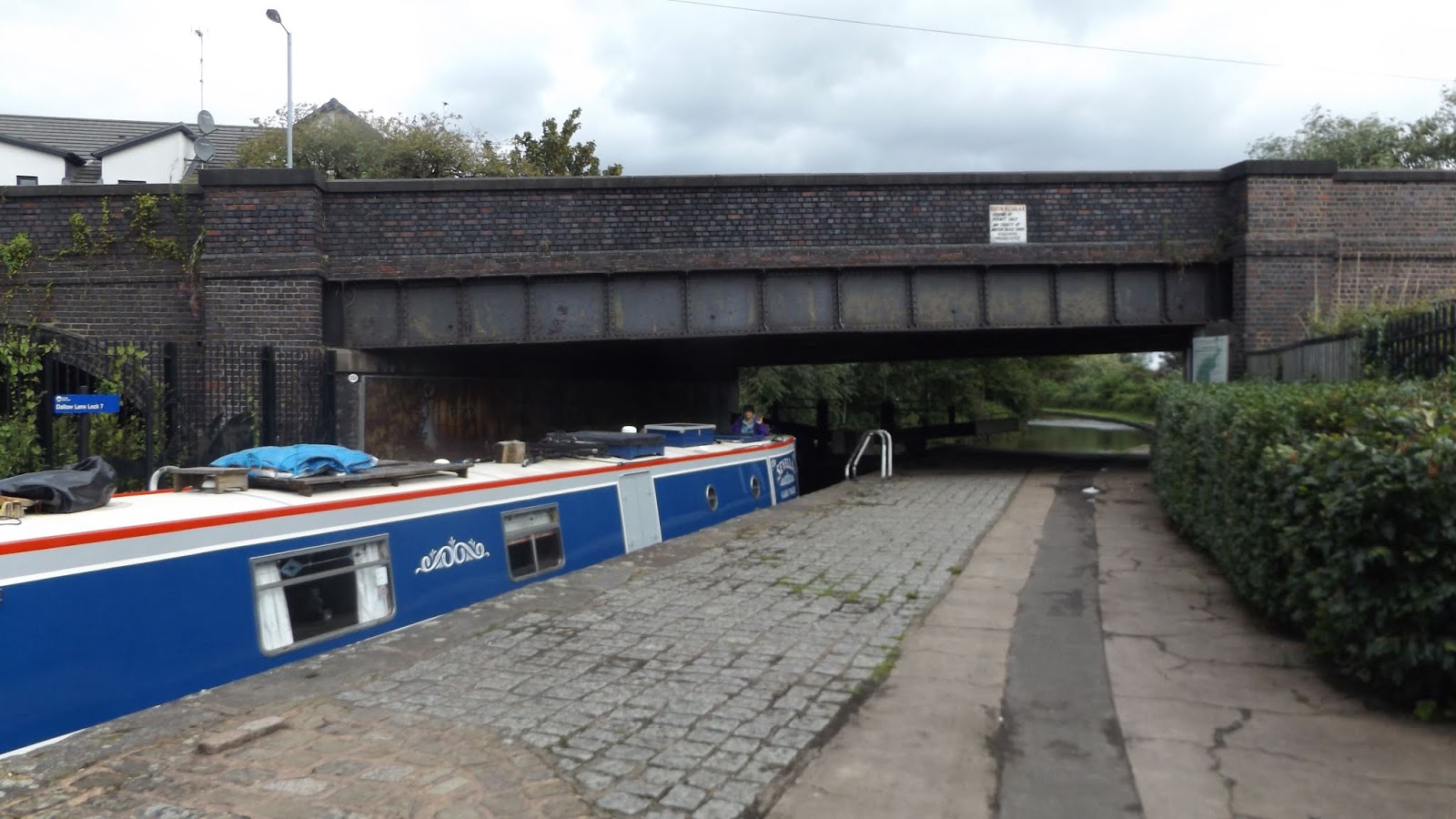 Steel lock gates may be ugly, but at least they last well… 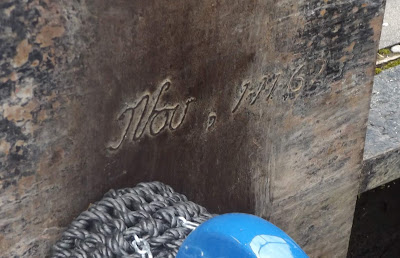 Doing a U’ey at Shobnall at the entrance to the marina. 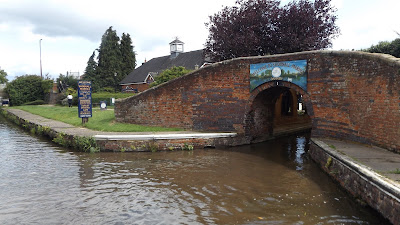 Shobnall Marina occupies the terminal basin of the Bond End Canal, in fact the covered dry dock at the end of the basin was Lock 1, Lock 2 dropped the short canal onto the River Trent at Bond End, a mile to the east.
Although the river was a difficult waterway to navigate, by the early 1700s the route between Wilden Ferry (now known as Derwent Mouth) and Burton had been improved by dredging and the construction of locks. Wharves and warehouses were built at Bond End to service the burgeoning brewing industry in the town.

Now enter Josiah Wedgwood and the remarkable Mr Brindley. Wedgwood wanted a fast and safe method of carrying his crockery from The Potteries to the Midlands and south, Brindley had a dream of connecting the Trent in the east to the Mersey in the west by water, what he called The Grand Trunk, later to become the Trent and Mersey Canal.
The Burton Boat Company were at odds with the proposal of the canal from Derwent Mouth (the Trent end) to and through Burton, petitioning the canal company to move the eastern start of the canal to Burton and to join the Trent there. But Brindley was having none of it, sticking to his plans. The canal up from the Trent past Burton to Stone opened in 1772, and, as a further snub to the BBC (that’s Burton Boat Company not the broadcaster…) built the canal to broad dimensions up to Horninglow Basin to allow Trent barges to offload here at the edge of the town.
In an effort to mitigate what must have been a serious threat to their trade, the BBC built a 1⅛ mile long cut from the canal to the river, the Bond End Canal. But the T&M wouldn’t allow a connection at Shobnall, so all goods from the T&M to the Bond End had to be transhipped across Shobnall Bar, a situation that wasn’t resolved until 1794.

The arrival of railway competition inevitable led to the demise of the Bond End, and by the 1870s it was pretty much unused. Finally the North Staffs Railway Company laid their spur line in the bed of the canal, leaving just the top lock and Shobnall Basin in water. The basin was still useful though as a transhipment point and sidings. By the 1970s the railways had gone the same way as the canal, and roads now follow the original line.

Jannel Cruisers took over the basin in 1973 and have developed the site into the marina and dry dock we see today. 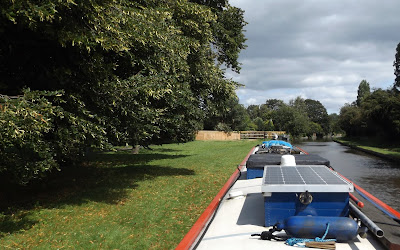 Friday was grim all across the country and Burton was no exception so we stayed put, heading back to Willington yesterday morning.

We stopped to fill the water tank at Horninglow, then toddled on in intermittent sunshine. 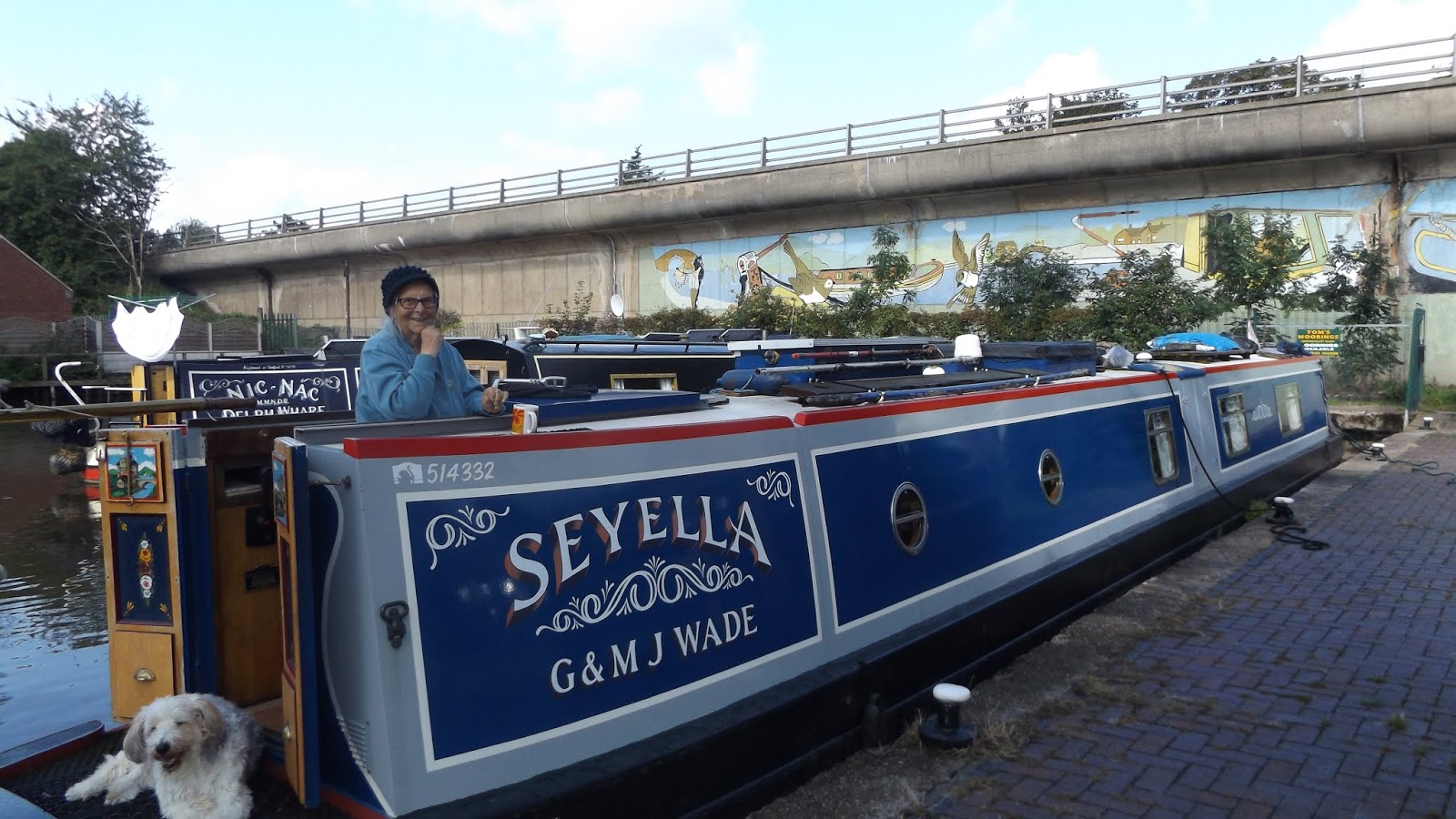 Horninglow, as I mentioned, was the limit of navigation for wide barges, just a half-mile up the canal is the first of the narrow locks. I don’t know why Brindley didn’t make this one wide too, starting the narrow locks at Branston instead. Would have made more sense, but the old chap didn’t do anything without a good reason…

The Dove was full as we crossed in on the aqueduct. 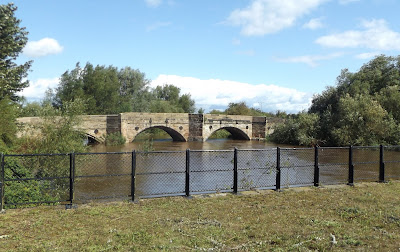 Both the Soar and the Trent at Sawley and Cranfleet are in flood at the moment, and ironically restrictions on the Leicester Line of the Grand Union are just being eased, restrictions in place due to low water levels in the feeder reservoirs. Don’t you just love British weather!

We timed our arrival in Willington just right securing a spot just past the winding hole and opposite the service wharf. 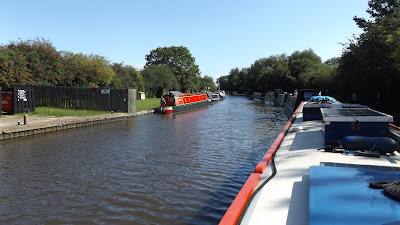 We wanted to be up this end of the moorings near the car park to make it easier for our visitors. KevinToo and his mum Sheila arrived at around a quarter to one, bringing gifts in the form of cream doughnuts for Mags, pork pie for me and treats for Meg. It’s always good to see them… A good afternoon nattering caught us up with all the news and gossip before they headed home later in the day.

And that’s about it. We’re going to be rather busier over the next few days than of late, joining up with Dave and Barbara on Liberty Bell tomorrow and aiming to be at Newark by Friday. At least the weather is looking better, so the Trent should be back in sensible mode by the time we get to Derwent Mouth.

Hi Both, Good to see you today even if only briefly. It would be good to meet up somewhere for a longer chat. Do you remember meeting on the waterpoint at Suttons a few years ago? Have a good trip to Newark with Liberty Bell on the Trent now that the levels have settled down and I hope you don't get stranded there by more rain. Thanks also for all the info on mooring in Burton. It has been difficult to get good info anywhere else and there is nothing like experience to rely on. Until next time - Ray.

Hi Ray, yes, I hope we do get a chance for a proper chat. I do vaguely recall the Hawkesbury meeting, but I've slept since then!
You're welcome for the info, as you say, local knowledge is always good.