Reading and beyond, three easy days.

On Friday we headed off from above Sonning Lock, heading for Reading. An uneventful lock-free trip which took us to the moorings alongside the large Tesco.

Passing the entrance to the Kennet and Avon Canal 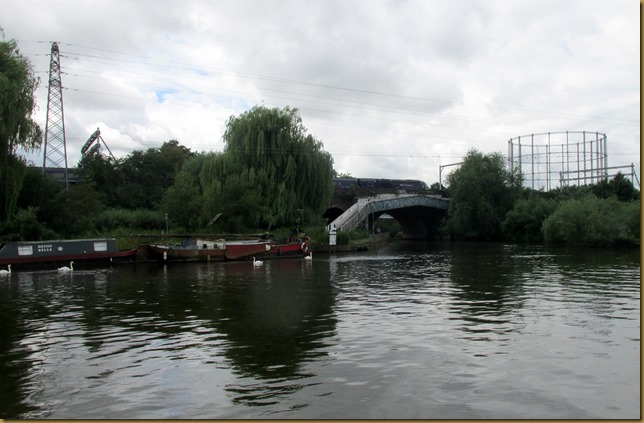 Moorings under the trees at Tesco 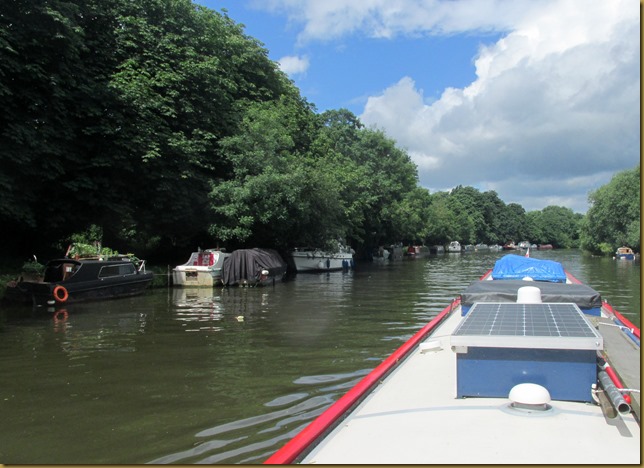 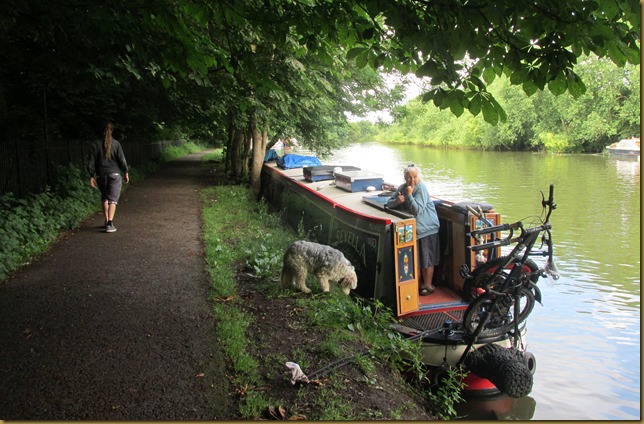 We were lucky to find a spot.
With no restrictions on this stretch, it’s attractive to boaters who have no intention of going far. So there are limited spaces for boats passing through.

On the opposite side of the river, I can’t believe this is still floating. 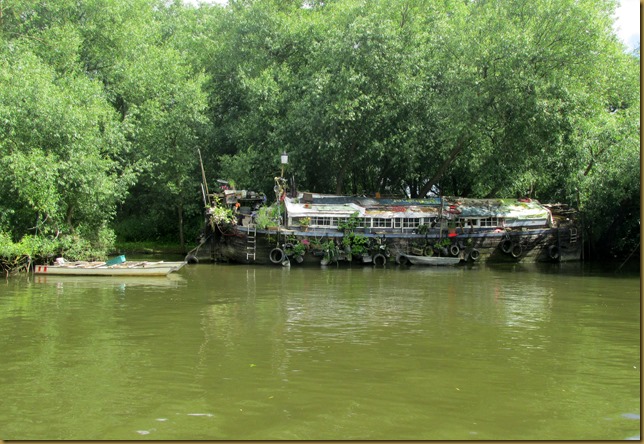 It must be on the bottom!

I did one load of shopping after we arrived, then intended to do more on the Saturday morning before we left. But I was just getting ready to go when I heard a clunk from the front of the boat and went out to find a pair of youths emptying gear from inside the cratch. When challenged they told me that they were just “borrowing“ it to help a mate out on his boat across the water. What sort of task they had in mind requiring two axes, two ropes and a mooring chain I have no idea. Anyway, I got it all back…
I decided not to leave Mags on her own, so we untied and set off into Reading. The shopping can wait! 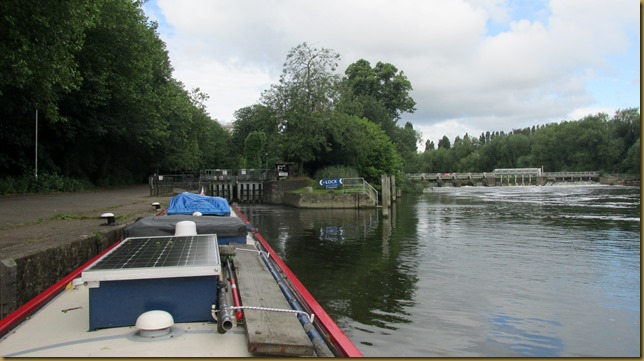 We were collecting guests on Sunday morning for a cruise up river, so really wanted to be conveniently in the town.

We were lucky again, getting a good mooring on Christchurch Meadow. 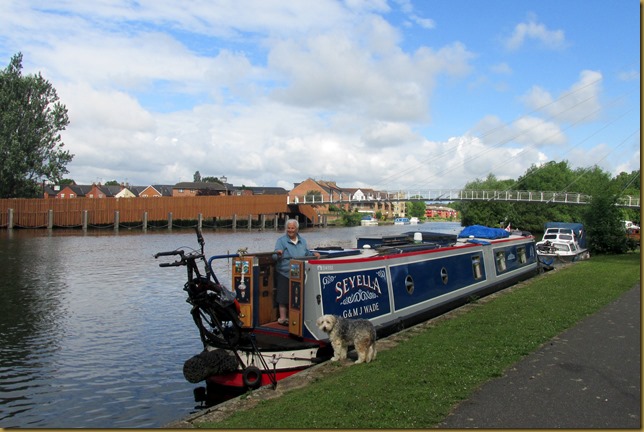 The bridge in the background, giving pedestrian and cycle access from the meadow to Reading Station and the town centre, was opened last September.

We were up on Sunday morning fairly early, a chance to tidy up a bit before our guests arrived. Simon, Ros and Simon’s son Henry turned up late morning, having driven from home north of London to Oxford, then back to us. They’d already done some miles!

After an early lunch/late breakfast we set off upriver. 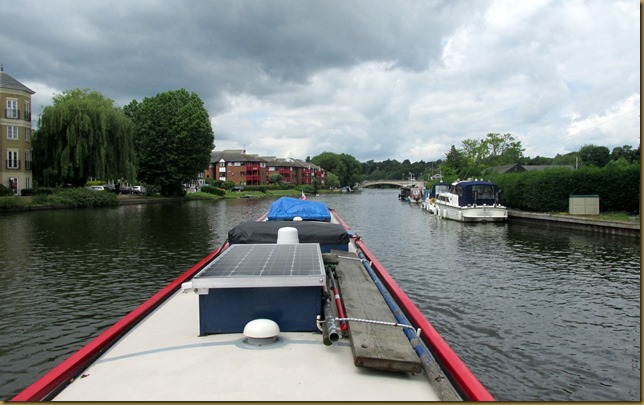 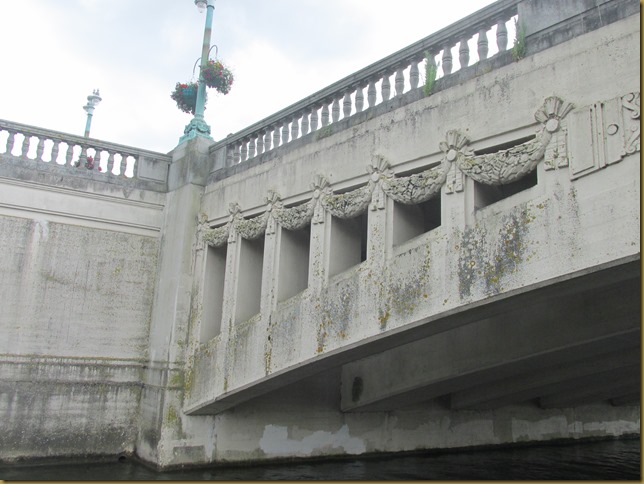 We had a gentle cruise out of Reading, passing several craft out and about on an overcast but warm and dry Sunday.

Mapledurham was our one and only lock on the trip. 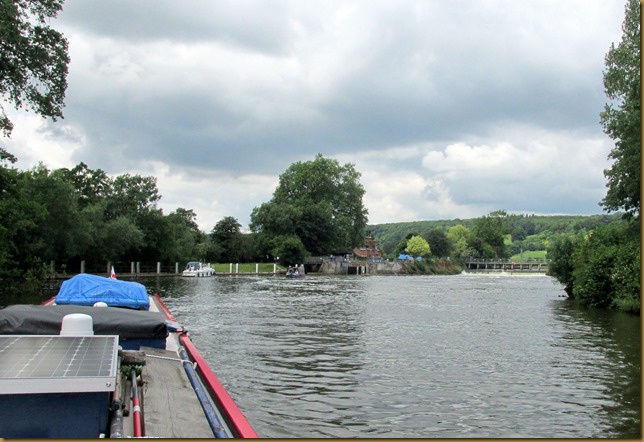 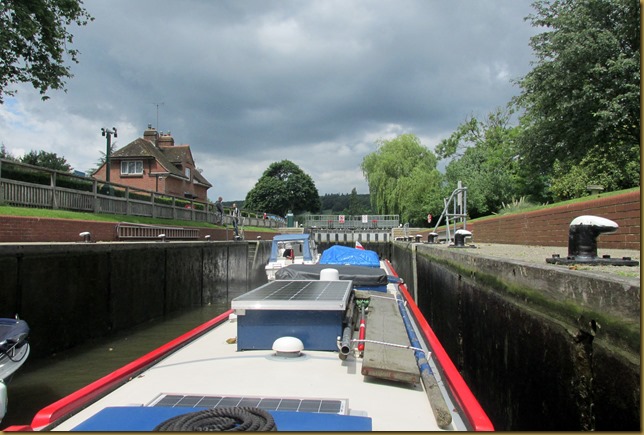 A first for Simon and family. Although he has a boat on the Lee, he’s never brought it down onto the Thames.

Out of the lock and heading for a late lunch at Pangbourne Meadow. 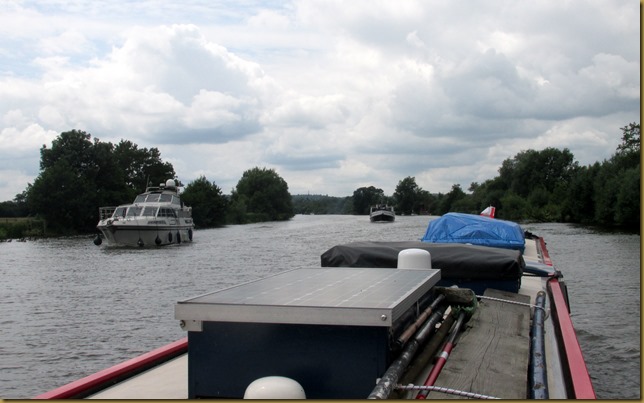 Father and son team on the tiller… 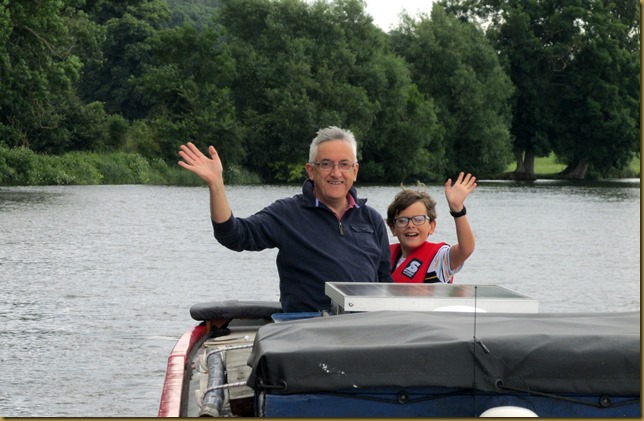 Mooring on the meadow 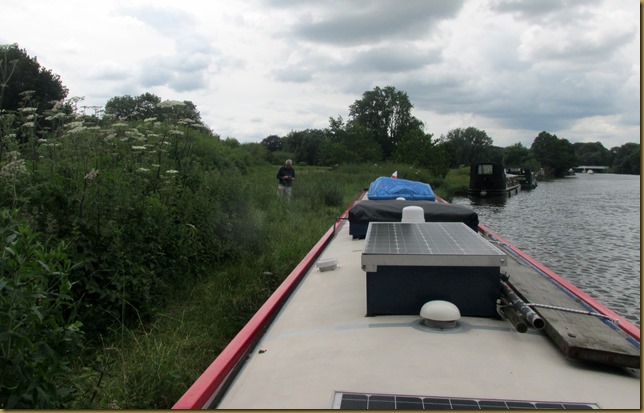 We had a good afternoon, Henry and Meg playing ball and the older ones chatting. It was with regret that they had to leave to catch a train back to Reading and their car for the drive home. I think Henry would have stayed, given half the chance! Great company. See you all soon, folks.

We’ve had a chillin’ day today, but tomorrow we’ll push on a bit. Maybe not all that far, though.

Lucky you were aboard Geoff when they started helping themselves. I have heard they lay in wait until the owners have gone into Tesco then the raids start.

So far we have been lucky there, but Vic always stays aboard and sits outside with the girls.

It is quite nice in Caversham anyway and Waitrose is very handy to the moorings there behind he island.