Well, it looks like we’re having an Indian Summer, after all. The weather has been getting steadily warmer over the last 2 or 3 days, this evening is glorious, now the breeze has dropped.

We’ve had another good day, on the broad reaches of the Aire and Calder Canal, and the River Aire itself.

We had a lockie on this morning at Pollington, so were through that lock like a dose of salts, and on our way to the next at Whitley.

The bank protection works near Heck Bridge look to be almost completed, now. 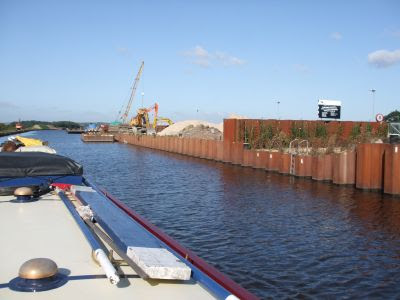 We met a couple of boats coming down from Whitley, so the lock was empty for us. It’s still very quiet, not many boats on the move at all. 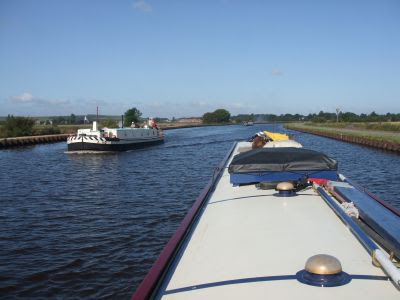 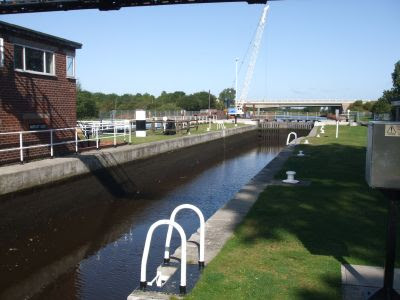 I’d much rather use this than a windlass and back muscles! 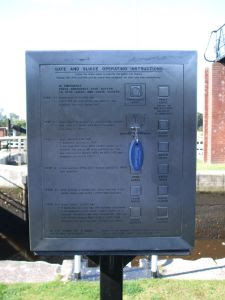 Just before Knottingley the navigation passes Kellingley Colliery. The now defunct coal wharf is lined with Tom Puddings, the compartment boats that were used to move coal from the pits to Ferrybrdge Power Station. From here at any rate, it mostly goes by road.

Kellingley and out of work Tom Puddings. 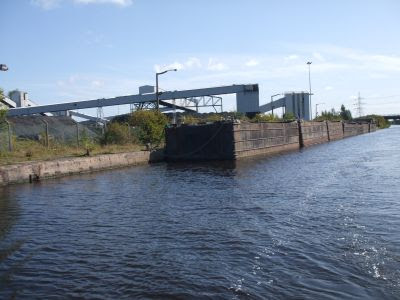 The last time we came through Knottingley we had a close encounter with Rix Owl under one of the bridges, but we came through today unscathed. Ferrybridge Flood Lock was showing a red light as we approached, then the gates opened and out came Fusedale H, heading back to the Trent and another load of gravel. 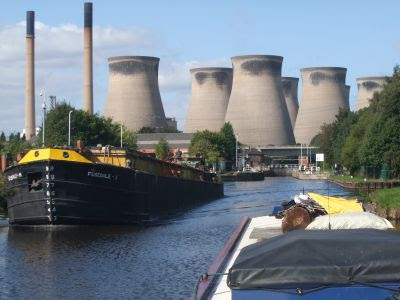 We had a chuckle going through the lock. The lady lockie waved us in, closed the gates and drew the top paddles to fill the lock. Then just a few seconds later the top gates were opening, having raised us just 4 or 5 inches. We didn't even stop, the lock filled in the time it took us to cruise it’s length!

Out on the river, the coal wharf for the power station is passed. The elevator which lifted the Tom Puddings from the river, tipped them to discharge the coal and returned them to the water stands idle, while truck loads of coal from Kellingley arrive behind.

Ferrybridge Coal Wharf
From Ferrybridge there’s a very pleasant run of 4½ miles up the river, before coming onto Castlefield Cut at Bulholme Lock.

Just above Castlefield Lock is Hargreaves Boatyard, where the tugs that pushed the strings of Tom Puddings are also waiting the return of a degree of common sense…. 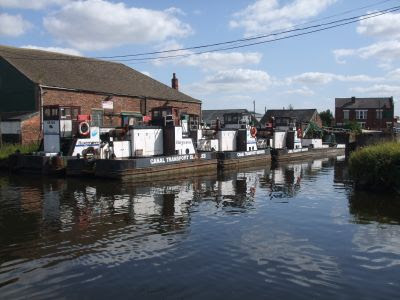 A right turn out of Castlefield Lock took us back onto the river, and the 3½ mile trip to Lemonroyd Lock. In contrast to the minimal rise at Ferrybridge, this is the deepest lock on the navigation, today around 18’. 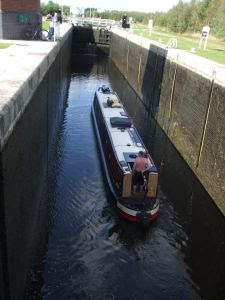 The lock took about 20 minutes to fill, then Meg and I walked to the next, Woodlesford, only about 1¼ miles.

We passed Bayford’s Oil wharf on the way, where the Rix boats discharge having loaded at Goole Docks. 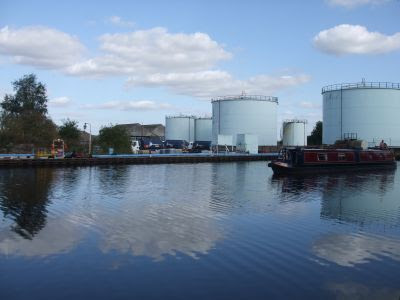 We came out of Woodlesford and moored for the night just in front of MV Wyre Lady, last seen on the Don at Sprotborough. I wonder what the old lady is doing over here? 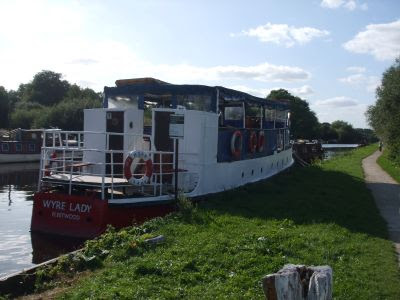 Tomorrow will be an early start to get to and through Leeds. Just 2 more mechanised locks then it’s back to muscle power.